A Cake by Committee transient Art an amazing part of 350th 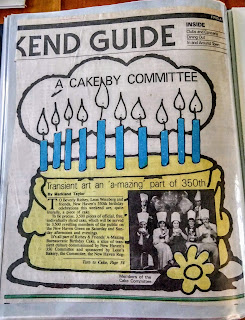 To Beverly Richey, Leon Weinberg, and friends, New Haven's 350th birthday celebrations this weekend are quite literally, a piece of cake.

To be precise, 3500 of official, free, individually sliced cake, which will be served to 3500 reveling members of the public on the New Haven Green on Saturday and Sunday afternoons and evenings.

It's all part of Richey and Friends' A-Mazing Bureaucratic Cake. A slice of transient culture commissioned by New Haven's 350 Committee and sponsored by Leon's Bakery, the committee, the New Haven Register, and the Arts Council of Greater New Haven. And what is more culturally transient than and edible piece of cake?

Actually, New Haven's A-Mazing Bureaucratic Cake is a combination of the edible and non-edible. The edible portion, supplied by Weinberg's Leon's Bakery, will consist of a generous supply of sheet cakes.

The non-edible portion will be an "elaborate and humorous" central structure-an 14-foot high iced facade of city hall.

It will have cut out windows through which the edible slices of cake will be served and part of the fun will be a "bureaucratic maze" (hence the cake's amazing title), a crowd-control device through which would-be noshers will be directed.

Be not afraid. The whole bureaucratic approach, including filling out a registration form, supplying requested information, and ultimately receiving approval for a piece of cake, won't take more than a minute or two-even allowing for "amusing bureaucratic mishaps".

The Arts Council of Greater New Haven's director of marketing and membership, Richey is no newcomer to transient culture or cakes.


Cake first became an art form to Richey when she worked as an apprentice to Paul Rutkovsky, the founder-director of Papier Mache Video Institute, from 1978-1983.

Then, in 1983, Richey's submission to the Connecticut Chapter of the Women's Caucus for Art Spring Cleaning Show was a twenty-inch tall cake in the shape of a Comet scouring powder can. It both delighted and fed the public.

The following year, Richey contributed a military wedding cake to New Haven's first show of 1984 (based on George Orwell's novel). And her work has continued with such appetizing pieces as Famous Cookie, Eat Audubon Street, and the Profitable Hartcake.

Her A-Mazing Bureaucratic Birthday Cake is, however, her biggest project to date, and the first time she hasn't baked the cake herself. "When I started thinking about the project after the 350 committee commissioned it, I found myself faced with endless questions," Richie {sic} says. "What is a city? What do you give a city for its birthday? What will the weather be like? Who will attend? How many will attend? and so on.

"Since this would be by far the biggest number of people I have ever served cake to, the main issue became the actual serving. Obviously, one person couldn't possibly serve 3500 people. So it became clear that I needed an organization, a system, a bureaucracy to make it all happen."

So Richey brought together some of her artist friends with some "commissioner type people" to interact. She ended up with a Cake Bureau or 30 individuals, including a systems consultant, a bureaucratic fashions designer, maze developers, paperwork producers, and more than a dozen cake commissioners.

"The bureaucracy involved frightens, inspires and fascinates me," Richey admits. "But through it all I've discovered that systems, hierarchy, aren't necessarily bad, that in certain cases they are essential to get things done. It's been quite a stretch for me working with so many individuals and groups."

The transient art will be documented for posterity-by the cake bureau's 3 documentation artists Michael Rush, Timothy Feresten, and Joan Fitzsimmons. And so that everyone can see everything that's going on at all times, there will be a television monitor revealing the action behind the city hall facade.

Richey knows a lot of variables inevitably impinge on such a project. "But the one variable I don't expect is no customers," she laughed. "Whenever I do cake I can't get them away from the table."

OTHER ARTICLES RELATED TO RICHEY'S ART/LIFE/WORK